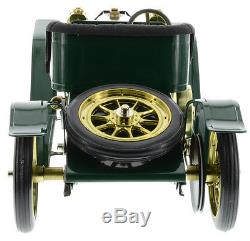 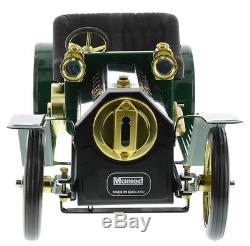 Mamod 1319BT Brooklands Tourer Working Live Steam Model Car - Ready Built. It's hard to imagine a Brooklands Tourer running on steam, but look no further, imagination is a wonderful thing! Mamod's models are realistic and fun. A magnificent working model of a steam car which captures the elegance of a bygone age. Finished in Brooklands racing green this model is steered via the steering wheel.

Supplied complete with funnel, oil and fuel tablets. Recommended Age 14+ or with supervision. History Mamod was founded in Birmingham, U. By Geoffrey Malins in the late 1930's. Mamod initially made model stationary live steam engines, progressing to road rollers, traction engines and roadsters over the years.

Mamod's live steam railway first appeared on the market in 1981. Their reputation for excellence has been built up over 50 years. All models are tested to strict standards and safety valves control the working pressures of all units. The Mamod range is broad, obtainable in pre-assembled or kit form to give variety and choice. Unlike Mamod steam engines of yester years which used methylated spirits as fuel, nowadays solid fuel tablets are used which are much safer.

Video will open in a new window. The item "Mamod 1319BT Brooklands Tourer Working Live Steam Model Car Ready Built" is in sale since Wednesday, August 3, 2016. This item is in the category "Toys & Games\Steam".